The RealTime Conference is inviting ASIFA-Hollywood members to a special May 4th day of learning, networking, and uniting as a global real-time community! The event will highlight the practical and potential uses of real-time technology across multiple markets, including design & manufacturing, volumetric capture, XR for entertainment, and more.

A special discount code will be sent to members of ASIFA-Hollywood via email.

Beginning at 8 a.m. ET, the day will include in-depth presentations, Q&As, roundtable discussions, and more. Experts and pioneers will discuss everything from ideation to immersive design to how real-time technology can change the creative process.

The American Cinematheque Presents Classic Animation On the Big Screen

Once upon a time, or maybe twice, there was an unearthly paradise called Pepperland, a place where happiness and music reigned supreme. But all was threatened when the terrible Blue Meanies declared war and sent in their army to destroy all that was good. Enter John, Paul, George and Ringo to save the day!

Discounts for the animation screenings may be available for ASIFA members who present their membership cards at the Aero box office.

The deadline to join ASIFA-Hollywood or to renew professional level memberships and register to participate in the 46th Annie Award voting is midnight Saturday, December 15. Delivery of screeners, however, is not guaranteed unless professional memberships are current as of November 1.

After this year’s drive, membership dues will be going up. If you want to renew early, we will take into account any funds you still have left on your current membership and pro-rate your re-enrollment accordingly. For more information, to renew current memberships and apply to vote (if you have not already done so) please visit the Membership page.

The whole family will love seeing this mix of cartoons and live actors light up the screen of the gorgeous Los Angeles Theatre!

Join us at the gorgeous Los Angeles Theatre and enjoy this 1988 classic on the big screen as part of the Los Angeles Conservancy’s Last Remaining Seats film series. Arrive at 1:00pm and enjoy live barbershop quartet entertainment!

Actress Joanna Cassidy and associate producer Don Hahn will be on stage to introduce the film.

Use the coupon ROGERRABBIT for 20% discount on your ticket order.

About the Film
This 1988 recent classic is a film noir-style detective movie where it just so happens that half the characters are played by live action people, with the other half animated cartoons.

Private detective Eddie Valiant (Bob Hoskins) has distrusted “toons” since his brother (and former partner) was killed by a toon. He vows never to work for toons again but suddenly finds himself wrapped up in a murder case where toon actor Roger Rabbit is the prime suspect.

The victim is Marvin Acme, owner of both Acme Corporation and Toontown, the cartoon-only world where the toons live. Acme’s will is missing, and the entire future of Toontown is at stake: rumor has it that his will stipulates that ownership of Toontown should go to the toons, but unless it is found, the construction of a new freeway will wipe out Toontown.

The whole family will enjoy Who Framed Roger Rabbit – it employs all the twists of a classic 1940s film noir, but the fun juxtaposition of cartoons provides comic relief.

Information on how to receive the ASIFA-Hollywood member discount will be sent to members via email. (Discounts are not available for on-line sales.)

When retired basketball superstar Michael Jordan is suddenly plucked from Earth during a live-action golf game with Bill Murray and Larry Bird, the greatest basketball player of all time finds himself somewhere in the animated cosmos with a merry band of Looney Tunes. Enslaved by the evil owner of a failing planetary amusement park, Bugs, Daffy, Porky, Elmer, Tweety and the gang find themselves fighting for their freedom in an epic hoops showdown. The film also features an undeniably slammin’ soundtrack from a mid-’90s R&B dream team that boasts Seal, D’Angelo, Salt-N-Pepa and Quad City DJ’s.

Keep an eye out in the coming weeks where we will announce the official selections, workshops, panels, installations, and special programs for the GLAS Animation Festival 2018. In the meantime, pick up your passes here.

More information about special guests is available on the official website.

GLAS offers special pass discounts to ASIFA members and students. If you’re an ASIFA member you can enjoy 15% off festival passes! GLAS Animation festival pass gives you full access to all events associated with the festival including:

Please bring your ASIFA membership card for verification in order to receive the pass at the discounted rate.

Visit their website for more information about our festival, lodging, registration, volunteer information, and sponsorship.

Seven years after the Cinematheque first brought these anime favorites to our theaters, their assorted heroes, heroines and mystical creatures continue to weave their spell.

Join us for some of Studio Ghibli’s greatest masterpieces presented on the big screen in 35mm, including Spirited Away, Princess Mononoke, My Neighbor Totoro, Porco Rosso, Whisper of the Heart and Kiki’s Delivery Service.

ASIFA members presenting their membership card at the Box office will receive a $10 ticket (15% discount)!

For more information and theater locations, be sure to visit the official website. 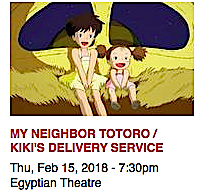 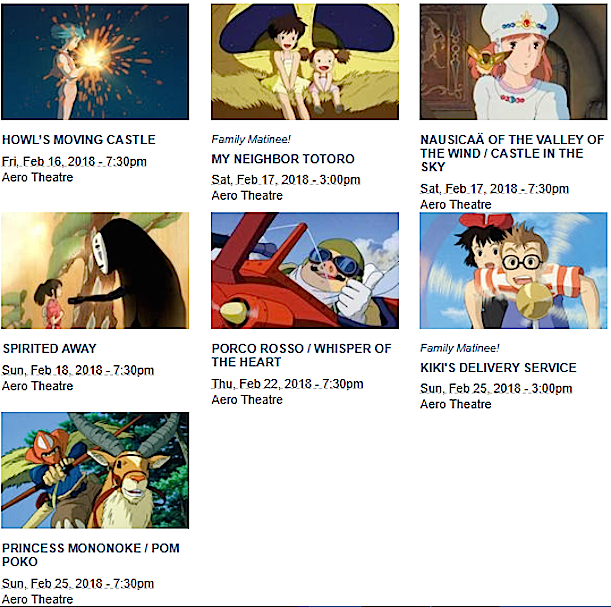 Where the Wild Things Are (1973): an animated short subject based on the children’s book by Maurice Sendak. 7 min. Directed by Gene Deitch.

Nutcracker: The Motion Picture (1986) featuring sets and costumes designed by Maurice Sendak, this big-screen adaptation of the Pacific Northwest Ballet’s long-running performance of The Nutcracker is a fantastical take on the Christmas classic. 85 min. Directed by Carroll Ballard.

Screenings of Interest at the American Cinematheque

THE HUNCHBACK OF NOTRE DAME
Sat, Sep 16, 2017 • 7:30pm
Retroformat presents Universal ‘s 1923 super-production, with its classic portrayal of Quasimodo, the bell ringer of Notre Dame by Lon Chaney, Sr. Special guest Dave Slaughter will also be on hand with the untold story of his grandfather, silent movie actor John Gough, and his brief-but-memorable role in THE HUNCHBACK OF NOTRE DAME. With live musical accompaniment by Cliff Retallick.

History of the Soda Fountain / SPEEDY
Sun, Sep 17, 2017 • 5:00pm
Cary Farnsworth’s illustrated presentation on the history of the soda fountain is followed by SPEEDY, the silent classic starring Harold Lloyd as a baseball-obsessed soda jerk who becomes a cab driver. Join the Cinematheque in the courtyard from 3:30 – 4:30 PM for an ice cream social!

THE RED SHOES
Fri, Sep 22, 2017 • 7:30pm
Presented by the American Cinematheque, the Hollywood Foreign Press Association and the Film Foundation.
A Technicolor dream of a movie, THE RED SHOES stars Scottish dancer-turned-actress Moira Shearer as an aspiring ballerina caught between the maniacal, domineering passion of impresario Anton Walbrook and the equally-controlling love of composer Marius Goring. An awesome, superbly fluid blending of dance, a Golden Globe-winning score and Jack Cardiff’s Technicolor cinematography.

THE LOST CITY OF CECIL B. DEMILLE
Sat, Sep 23, 2017 • 2:00pm
For his 1923 biblical epic THE TEN COMMANDMENTS, director Cecil B. DeMille built one of the biggest movie sets of the silent era, which was buried after the film was completed. Director Peter Brosnan’s quest to unearth the site makes for one of the most fascinating behind-the-scenes documentaries ever. Panel discussion following with director Peter Brosnan, producer Dan Coplan, composer Steve Bauman and others.

ASIFA-Hollywood members may receive a discounted ticket price. Information on how to receive the discount will be sent to members of ASIFA via email. (Discounts are not available for on-line sales or for certain screenings.)

For additional details and information on other American Cinematheque events, visit the Cinematheque’s Events page.